As the Nigerian media industry marks 150 years of practice this year, the PTCIJ team did not only change the course of that history, it consolidated a legacy for securing the future of the industry.

This year, PTCIJ further disrupted traditions and ushered in a new era of collaborative journalism, against the norm of competition which has characterised the 150-year-old industry. The investigations led by the Leaks.NG team were conducted and published jointly by six media organisations. These investigations led to a legislative committee inquiry on Stamp Duty revenue in the country, the sack of the corrupt NFF boss as the Vice President of the Confederation of African Football (CAF) and the ongoing prosecution of the Nigerian Bulk Electricity Trading (NBET) boss.

In a similar stride, six news organizations have institutionalised fact-checking in their newsrooms thanks to our fact-checking platform, Dubawa. This year, the Dubawa program also signed a partnership agreement with one of the most popular social media networks in the world, Facebook, as a fact-checking partner in Africa under its Third-Party Fact-Checking Programme.

Riding on the culture of learning and attentiveness to the socio-political situation of the country, the organization launched three new programs. The Humanitarian program launched with the mission to improve media narratives of various conflicts, violent extremism and the attendant human rights issues. The Natural Resource Programme (NAREP) and the Agriculture Reporting Programme (ARP) kicked off to build the capacity of the media to report the two strongest economic and revenue alternatives for Nigeria.

PTCIJ’s record of remarkable impact continued amidst the current shrinking media space in the country (over 71 reported attacks on journalists and newsrooms) the existential challenges of financial sustainability, the troubling proliferation of disinformation and lack of trust in the media.

Additionally, about ten student journalists of the NEXTGen program have successfully gained employment and some have gone on to become prominent ‘mediapreneurs,’ signalling a brighter future for the industry.

As we say goodbye to 2019, we look forward to an even greater year ahead. In the meantime, here’s a summary of our year in numbers: 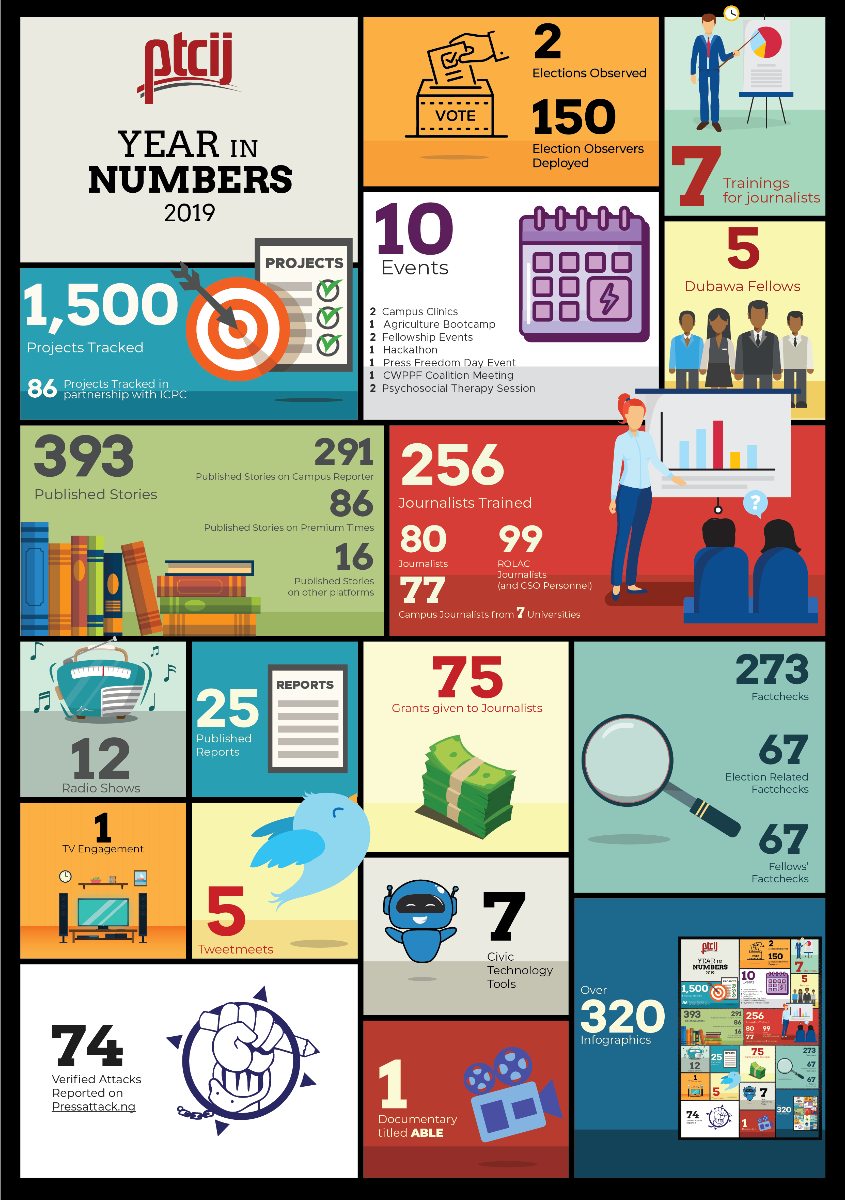