“PHCs” is an acronym for Primary Health Care Centres. In Nigeria, the primary health care system was adopted as a sustainable grass-root approach meant to address the main health problems in communities. The principles of primary health care (community participation, equity, essential health care, intersectoral collaboration, and appropriate technology) underscore the great value of this approach.

In an ideal system, PHCs provide a sustainable means of achieving health-for-all, regardless of social status or ethnicity. However, the state of PHCs in the country is appalling, with Nigeria ranking very low in global healthcare quality and access.

Who is to blame for poor healthcare in Nigeria?

Rather than aimlessly point fingers, the Premium Times Centre for Investigative Journalism (PTCIJ) in March 2017 launched a citizen driven innovative primary health care tracker which provides regularly updated information on the services, personnel, sanitary conditions and general satisfaction derived in using Primary Health Care Centres in Nigeria. Ultimately, the findings from the Tracker could be used by policymakers and the general public alike in demanding for improved medical services.

Citizen reports on the platform from 8 states and counting indicates there are 5 major problems which are synonymous with PHCs across Nigeria. These are:

Poor water supply is typical of PHCs across Nigeria. In Giza community of Nasarawa State, one of the respondents stated that healthcare workers have to request for water from neighbouring residents for use at the PHC. Although the PHC in that community originally had a water facility (borehole), it got damaged and there are no plans to fix it.

In Adikwu-Icho community of Benue State, it is no different in the fact that there is no water supply, but worse because there is not even a borehole in the facility. During the rainy season, buckets are arranged under the roof edges to collect rainwater.

Similarly, in Enugu, the clinic which was built before the Nigerian independence (October 1st 1960) relies on rain and stream water for survival as there is no well or borehole.

The issue of the lack of electricity supply in Nigeria is no longer news, and it is a less wonder that PHCs suffer no less. In a community, there had been no public electricity for over seven years; thankfully, a solar inverter was installed as a substitute. In others, torchlights or phone lights (if it exists) are the main sources of light, in addition to sunlight (during the day) of course. This light source is used during life threatening situations that may occur at night such as child birth.

In Edikwu-Icho village with no electricity, a rechargeable lantern is used to attend to other patients while a small electricity generator is saved for deliveries or emergencies at night. According to a nurse, the centre attends to about 15 patients from the community and its environs daily. In a month, about 25 deliveries are conducted. No comment was made in relation to the deaths that may have arisen as a result of such poor conditions.

In the words of a respondent, “you know what life is like in the villages. What will make that doctor to leave AMAC and decide to go and work in Karshi village? No light, no water and again insecurity.” Sad but true!

The pitiable state of PHCs across the country and the living conditions subjected to workers, makes PHCs an unattractive location for doctors and other qualified medical personnel. In a swampy community in Benue State, a health worker relayed a tale about the struggle associated with movement to and fro the PHC. In her story, a motorcycle taxi operator stopped halfway through her journey to the PHC and refused to go any further due to the deplorable road. With no other option, she had to carry the drugs on her head, whilst wading through the flooded road under the rain.

Asata Primary Health Centre in Enugu State is no different from the others. The PHC which is meant to have doctors, qualified midwives, pharmacists, nurses, cleaners, night watchmen and caretakers, does not have any. The available hands in a PHC in Nasarawa State “treat at least 15 people daily without shifts”. The building is too small and not conducive at all. In fact, all the windows and doors to the PHCs were broken down. It is thus not surprising that according to a survey conducted by Civil Society Legislative Advocacy Centre (CISLAC), in Nigeria one in 13 women dies during pregnancy or childbirth. 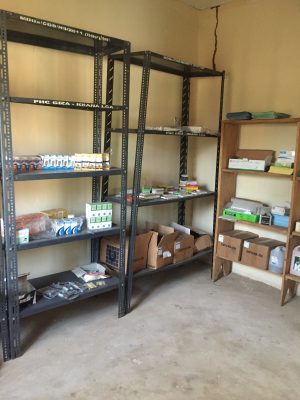 This was seen in Nasarawa, Benue, Enugu and Niger states, where the health workers struggle everyday with the challenge of attending to thousands of residents with limited drug supply and no standard equipment.

In Niger State particularly, a respondent alleged that equipment and drugs brought for the abandoned project had been in the custody of the chief of the town who refused to hand it over to the health workers.

Covered in the dust in a community in Enugu State are drugs that have already expired; their manufacture and expiry dates read 2005 to 2008. Next to drug shelves is a microscope with obsolete lens. According to a respondent, the drugs were already expired at the time of supply just as the microscope has never worked since it was supplied.

Evidently, the Federal Government, through the National Primary Health Care Development Agency (NPHCDA) does not follow through in the management of the healthcare centres.

The problem of abandoned/partially completed PHCs is peculiar to all communities in Nigeria and it is a problem that cannot be ignored or overemphasised. There are 805 abandoned primary healthcare centres across the 36 states of the federation and the Federal Capital Territory, which were awarded between 2004 and 2015. These projects have gulped N25.2billion, out of which the south-east region accounts for N5.8 billion (23 percent of the total). In south-east alone, there are 98 of these projects, which are either abandoned or untraceable.

Disregard for due process in contract award, violation of the 2007 Procurement Act and misdemeanour by contractors are the reasons contracts for healthcare centres are either untraceable, abandoned or haphazardly done. Lack of budgetary allocation is another reason for the prevalence of several abandoned projects.

The deplorable state of primary health centres in Nigeria is an example of the failure of government to treat primary healthcare as the cornerstone of a stronger and resilient public health system.

To make PHCs work, the key primary health care stakeholders – the people, the government and the healthcare workers – must make strong commitments. The people must demand involvement in the planning, implementation and evaluation of PHCs which affect them; the government must express, in practical terms, political will through adequate funding, capacity building and system support; and the healthcare workers can support through innovative utilization of available resources and quality service delivery.